Footsteps of the Fallen 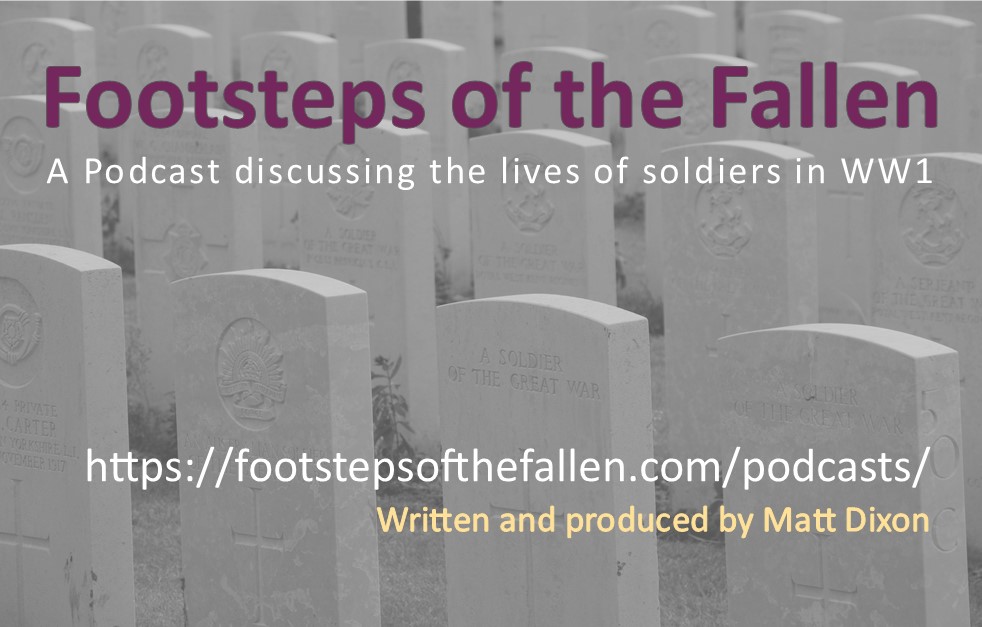 Footsteps of the Fallen

Podcast have certainly opened the world of voice publishing to anyone who has a passion, time and understanding of modern information technology. This is certainly true for the historian, genealogist and researcher Matt Dixon. Matt has a passion for the Great War. As a result, three times a month, he takes us on a reflective walk through the battlefields of World War 1. Reciting the stories of the men and women who have given their lives for us.

For example, in the episode ‘The Sepoys on the Seafront’. We start our journey on 22 October 1915 on the seafront in Brighton. A young lady placed a telephone call to the Brighton Constabulary, stating there was a disturbance on the seafront. A collection of men were waving sabres, chanting, and singing. They were wearing long robes, had bare feet, and purple turbans with long, full beards. When the Police arrived, they discovered that the townsfolk of Brighton were swapping cigarettes for Chapatis with the Indian soldiers who were cooking their evening meal.

They later sent the Indian Army to the Western Front in Belgium. We are then told the story of Khudadar Khan, the first Indian soldier to win the Victoria Cross. It also introduced us to the miracle that is Indian Treacle, issued daily to each soldier, the common name being Opium.

In the episode ‘The Teaspoon of Talana’ we learn about the events of the 6th July 1915. Where over 600 men died, and thousands were wounded in the battle around the Belgian Village of Boesinghe, a German strongpoint called Fortin 17.

One Hundred years later a team of amateur archaeologists unearth a teaspoon that belonged to one of the fallen. Matt has a way of bringing these stories to life. Everyday items, like a teaspoon, seem to have so much more meaning when you know its history.

In conclusion of Footsteps of the Fallen

The stories told in this podcast are illuminating, informative and the human context is very moving. I would highly recommend this podcast. They are available from iTunes, Spotify, Buzz Sprout, and of course their website. Footsteps of the fallen.